It has been 2015 for quite some time now. After everybody already posted their end-of-year reviews weeks ago and it already became slightly awkward to still do so, I think I am finally ready to publish mine.

So, what happened in my life in 2014? The answer is many things and most of them happened at the same time. In fact, so many things happened during the last year that I had to go through my photos to actually be able to remember them all.

I visited Warsaw, then Helsinki and some other Finnish cities, Tallinn, Strasbourg and the Alsace, Amsterdam, Liechtenstein, Stockholm and Barcelona. I made a short trip to Aarhus that was more business than pleasure and since December I live in Istanbul to write my thesis and to finally finish my Master’s degree.

As long as I am still able to count that is ten countries. Still two short of my „one country per month“ goal, yet more than I hoped to be able to visit. Though I cannot believe that I have yet to pay a visit to London (a fact that will be remedied in 2015!), all in all I am quite happy with this success.

For 2015 I will again try to match my „one country per month“ goal, though I would like to make that mostly countries or regions I have not had the chance to visit before. The immediate choices would probably be the UK (I am looking at you, London!), Portugal (let’s try to speak some Brazilian Portuguese there and have people looking at me weirdly), Georgia (flights are cheap from Istanbul), Italy (been there, but not in Rome), Belgium, Austria, Switzerland and Luxembourg, but I also hope to visit some more „exotic“ place like China, India or Russia. Or maybe I will head to the US, let’s see about that.

Yup, after trying to find a place to write my thesis abroad for some months I was finally successful at the end of the year. Retrospectively it would have probably been better to do a six-month internship abroad in early 2014 and then come back and write my thesis in Germany, but hindsight is always easier than foresight. Nevertheless, that made me able to attend some French courses during the times when I had less to do (as if!). Finding some time to read French books and practice speaking a little will also be one of my goals for 2015.

Additionally, during the last months of 2014 I discovered MOOCs as a valuable source of information. There are many sites that offer online courses for interesting topics, but I found some real gems at udacity.com and skillshare.com. SAP’s learning platform openSAP also had one or two interesting classes, for instance in Business Innovation.

Now, as I already mentioned, I am writing my thesis. If everything goes well I should be done with my studies in the end of March, after 12 years of school and six and a half years of university. Time really flies.

There is lots of stuff going on here. I continued my work in IT consulting at adesso and got the chance to write my thesis in cooperation with the company. As adesso recently expanded to Turkey and is still in the process of setting things up in Istanbul, this is a great chance to learn about both how to internationalize a company as well as how to design a cooperation process between national subsidies of a consultancy.

At AIESEC, I had the chance to be a speaker at some national and international conferences and hold some workshops, which was quite fun. I also finished the projects of my agenda 2013/14. In July, after one and a half years as the head of the digital department (later brand development), I wrapped up my work and handed my team over to my successor. It hurt to leave the organization; I suddenly had much too much free time, did not have a platform to develop my leadership skills anymore and missed – and still miss – my team greatly. Still, in my last month there I found that I somewhat outgrew my role in the organization. I did not develop as fast as in the beginning, I had reached the goals I set for myself and all my projects were wrapped up successfully. I could not take up a position with higher responsibility because of my plans to leave the country for my thesis, so I developed a take-over process for my successor, provided him with training and ultimately left in high spirits.

Maybe it was not one of the biggest opportunities in 2014, but being the one welcoming our new Business Information Systems and ITMC students at the University of Hamburg on behalf of the department’s students is also one of the things I gladly look back to. Holding a speech in one of the nicest auditoriums of the university in front of all our new students was quite the experience. That the feedback I received afterwards was great and the student council received its highest number of applications so far probably shows that my time in AIESEC was well-invested and that I really was able to develop my skills in public speaking.

2014 was also a great year for networking. I met and got to know lots of interesting people: During the first half of the year mainly fellow AIESECers, in the second half mostly business contacts and company representatives. I got somewhat involved in the Hamburg startup scene and did a few side projects which may or may not yield some results in 2015. More on that probably in a later blog post.

In 2014 I also did not blog nearly as much as I wanted. That was less due to not having topics to write about than it was because I simply lacked the time (or the will) to do so. It was not important enough; not high enough on my priority list. I will try to change that at least somewhat and establish some kind of routine , though right now I do not know how that will look like. I will continue using Instagram because that is (I think still?) the place where the cool kids are and it provides an easy way to share moments with my friends. That is also a big difference to my other social media accounts; on Instagram I only follow people whose news actually are interesting to me. Twitter, I don’t know about that. I nearly did not use it at all in 2014, but maybe I will give it another chance. That probably depends on what else is happening this year.

I also took up jogging again and got quite fit – until I left for Istanbul. Here, at least close to my flat, there are simply no good spots to go running, so I might be somewhat out of shape when I return to Hamburg. Still, I will start again as soon as I am back.

Letterboxd states I watched 49 movies last year. I really do not know know how many books I read, though it was probably far too few. I would estimate some ten or twelve, the most interesting one probably being „Wir“ by Evgenij Samjatin.

Well, I will finish my Master’s degree. This will (probably) be the end of my university career, at least for now. I might be interested in doing some postgraduate studies, but at least this year I will probably not have any time for that. Because:

I will get a „job“. And I put „job“ in quotation marks because, while I have some ideas, I do not have one definite thing that I want to do or be or a definite idea how this „job“ will look like. There are multiple options and it will be hard to chose one or two from them. Though all of them at least somewhat involve leadership as a concept, all of them are somewhat business- and technology-related and all of them are things that I expect to challenge me and help me grow personally and professionally.

Then there is my goal to get my French up to a level where I am able to watch a movie or read a book without any translation problems. And, of course, 12 newly visited countries. That will probably be slightly harder than last year, mostly due to the fact that I will still be in Turkey until the end of February and I will not count this towards my goal.

Both the short-term perspective as well as the long-term one look exciting to me. Let’s go on an adventure.

After some days of trying to reserve the iPhone 6 online and just not been able to do so, in the early hours of Wednesday I finally succeeded. I got allocated a one-hour time period for picking up and purchasing the new device.
Fast forward to actually arriving at the Apple Store Jungfernstieg there was no employee waiting to greet me. Instead, there was a big sign announcing to „wait here“ if I had a reservation for an iPhone.

Behind this sign were two queues of circa 40 people.

After waiting in line for nearly an hour and then being taken by some nondescript blue-shirted Apple person to a random part of the store, my mood was at a low. It was also not helping that the salesperson decided to take another customer with us, who did not understand either English or German. He tried to communicate with wild gestures and weird noises that he wanted to pay with three different credit cards, though. I left the store more than an hour later, admittedly with an iPhone 6 but also with the feeling that had just been ripped off. That Apple did not care whether or not I bought their latest iPhone model. It was my worst shopping experience of the year.

Apple needs to rethink the way they are providing a shopping experience for their customers from the ground up. If they want customers to buy an „Edition“ watch that is estimated around 5.000 $, Apple needs to attend to a target group that can afford to buy such a product and align their store concept appropriately. People who buy 5.000$ watches do not stand in a queue to do so. And neither should people who buy 1.000$ smartphones, for that measure. They expect a salesperson that caters to their whims and offers them fancy chai latte or espresso, while sitting in some comfy leather chairs. They want to know just what they are buying. And they want to know how great it should make them feel to buy it.

I left a negative review in their feedback system some two weeks ago. Today I got a call from that Apple Store. They explained me that they wanted to but could not offer smaller time slots. Rather, they had to follow a corporate guideline, that automatically allocated up to 10 time slots per hour for every Apple employee that was on duty roster that day.

The problem does not lie in the store or the store management. It lies with Apple HQ – and I hope they are thinking on how to fix it. 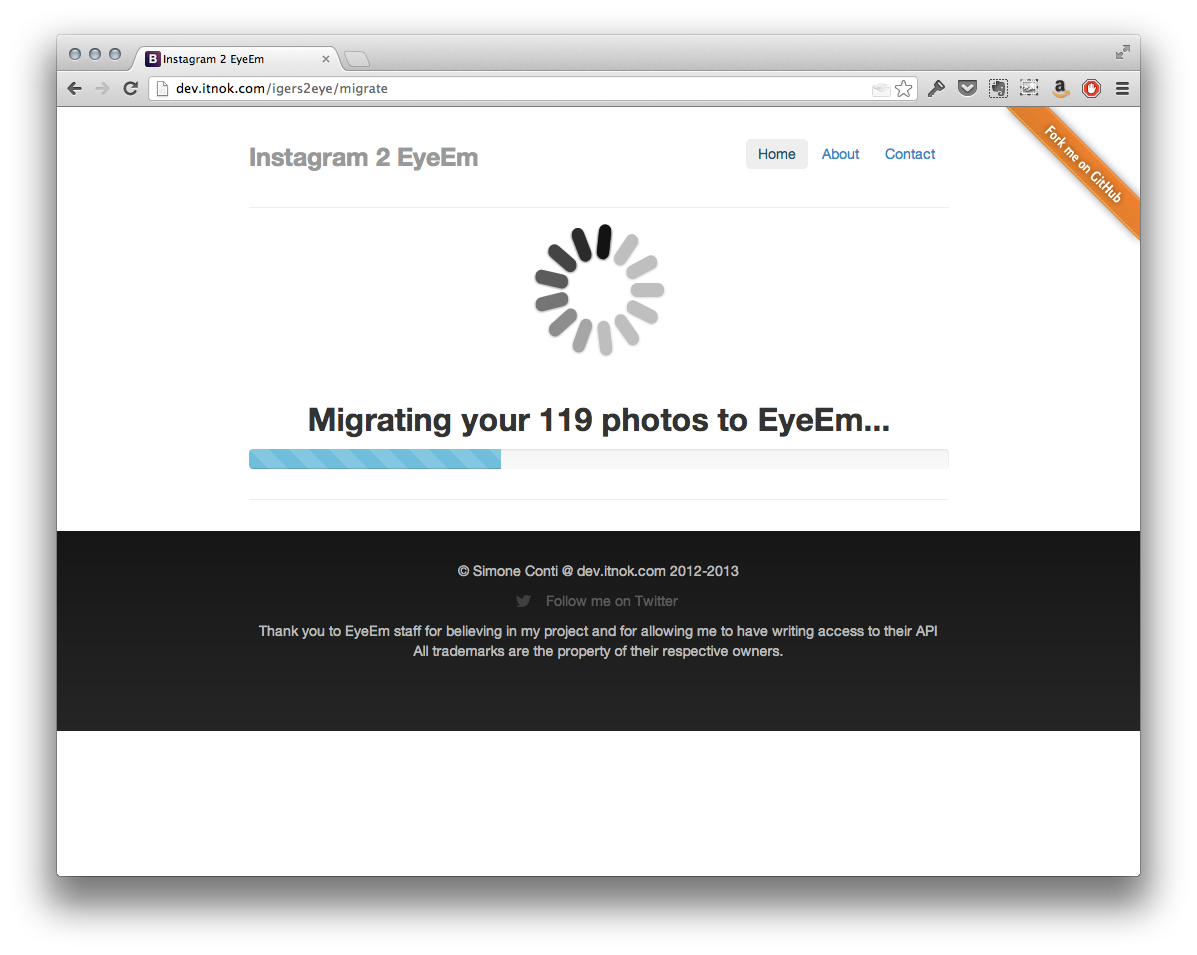 We thought it’s time for a statement and there’s a promise we want to give you: your photos will always remain yours and nothing will EVER be done with them without your consent.

Here’s to the Crazy Ones

However, with Android 4.1 this is no longer going to be the case, as we have not continued developing and testing Flash Player for this new version of Android and its available browser options.  There will be no certified implementations of Flash Player for Android 4.1. (Source)